DEMEC has invested in the development of a portfolio of qualifying renewable energy resources to achieve the lowest possible compliance cost to protect its ratepayers from unreasonable and burdensome impacts on their cost of electricity.

DEMEC’s goal is to comply with the spirit of the Delaware RPS without creating a negative impact on the customers or the Delaware economy.  In doing so, DEMEC has made the following significant investments in Wind Energy Resources:

DEMEC has committed to purchase all the renewable electricity and associated RECs from a wind farm (Laurel Hill) in north-central Pennsylvania under a 25-year agreement.   Laurel Hill is a 69-megawatt (MW) wind generation facility consisting of 30 Siemens wind turbines, each capable of generating 2.3 MW. Laurel Hill is capable of generating enough electricity to power more than 20,000 homes.

DEMEC was the first to sign an agreement with Blue Water Wind to purchase offshore wind energy. While offshore wind near Delaware has not been developed yet, DEMEC remains committed to support future initiatives. DEMEC currently sits on Governor Carney’s Offshore Wind Working Group to study the possibility of moving forward with a project off of Delaware’s coast. 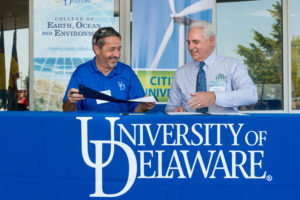