The Navajo Tribal Utility Authority is preparing to welcome volunteers to the Navajo Nation April-June 2022 for Light Up Navajo III, an effort with the American Public Power Association to bring electricity to families. Interested public power utilities may contact lightup-navajoproject@ntua.com for more information on the event. The following is a reflection by Heather Contant, director of government & community relations at Delaware Municipal Electric Corporation, on the experience participating in Light Up Navajo I in 2019.

The office was bustling as the Delaware Municipal Electric Corporation’s (DEMEC) crew prepared to leave for one week ahead of Saturday, April 13, 2019, for the Light Up Navajo Pilot Project. It was the first time DEMEC participated in a mutual aid event. The energy level in the office was like children the night before Christmas. Two lineworkers each from two of our member communities, the City of Milford and Town of Smyrna, volunteered with Kimberly Schlichting, now DEMEC’s President & CEO. The experience not only changed their lives but also affected the lives of so many at home.

Well before the DEMEC crew left, we knew that we wanted to share the great work being done in partnership with the Navajo Tribal Utility Authority and spread awareness of the lack of access to electricity here in America on social media. So, before the crew boarded the plane that Saturday, we took a picture and posted it to Facebook. Within 24 hours, that post went from reaching 29,211 people to reaching 255,498 people with over 3,800 shares! Calls came into the office from residents of the Navajo Nation asking about the program and how to get involved. The media reached out to learn more about our crew and the families they were helping. The legislature and the Governor wanted to pay tribute to the crew upon their return home to recognize their hard work to electrify as many homes as possible during their time out there. That is when we realized just how big of an impact Light Up Navajo had on not only the Navajo Nation but the local community here in Delaware.

DEMEC staff were glued to our social media page as we saw an outpour of comments and support. Each day, Kimberly took pictures of the DEMEC line crew and the landscape the crew was working in out there. Each night she would wait until 2 am to have enough bandwidth to post a handful of pictures online. Then, I’d get up at 6 am in Delaware and edit each post to include captions, stories, hashtags, and tags for local organizations. Every day I looked forward to seeing what pictures Kimberly was going to share next. Seeing the terrain and climate our crew worked in, and how dramatically different it was from here in Delaware, was astonishing. Hearing about the dust storms and chapped lips, the late nights and early mornings, and then seeing the crew after they returned home gave a glimpse into the conditions the NTUA crews work in all year long.

We read comments and received phone calls from people delighted that our crew would come from Delaware to Arizona to bring electricity to these families. One woman from the Navajo Nation posted, “Sitting at my window with happy tears streaming down my face as we are getting our electricity at this very moment! Thank you is not enough words to express my gratitude and happiness at this very moment.” Another woman said, “Thank you, thank you, thank you. The men that came out from out east, and helped some people with their electricity…God bless you, and your family.” After DEMEC’s line crew came home, there was a series of interviews from interested media sources wanting to follow up on their experience. I watched as these men teared up and talked about the families they met and the nonstop gratitude and appreciation they received.

It wasn’t for fame and glory that our crew went out to help. It is just what they do and how they are wired; to serve and help. Our line crew set out with their families in mind, thinking of their children and what it would be like for them to do homework by candlelight. They set out thinking of what it would be like to have to store food in coolers every single day because there isn’t electricity to run a refrigerator. The impact back at home was unknown before they left. However, the pictures brought to life a story that truly transcends words. The emotions after the crew returned home were palpable. The thousands of posts sharing love and gratitude from people throughout the country were proof that the impact of this project was beyond anything we could have planned.

Now, over two and a half years later, we still hear from residents of the Navajo Nation. They call or reach out to us on social media. Many of them wait hopeful that more crews will be coming out again. They join in the excitement as we share new updates about DEMEC and we do the same with NTUA. The connection didn’t stop after the week ended. It was almost like we became family… a utility version of the Brady Bunch if you will.

Many times, I’ve heard of fellow public power utilities referred to as “sister utilities.” I used to think it was just a catchy phrase that communications professionals, like myself, use to help people see the big picture. However, after DEMEC’s involvement in Light Up Navajo and mutual aid, I now see that it is the perfect and sometimes only way to accurately describe the deep connection and unbreakable bond between public power utilities. We come together in times of need, time and time again. 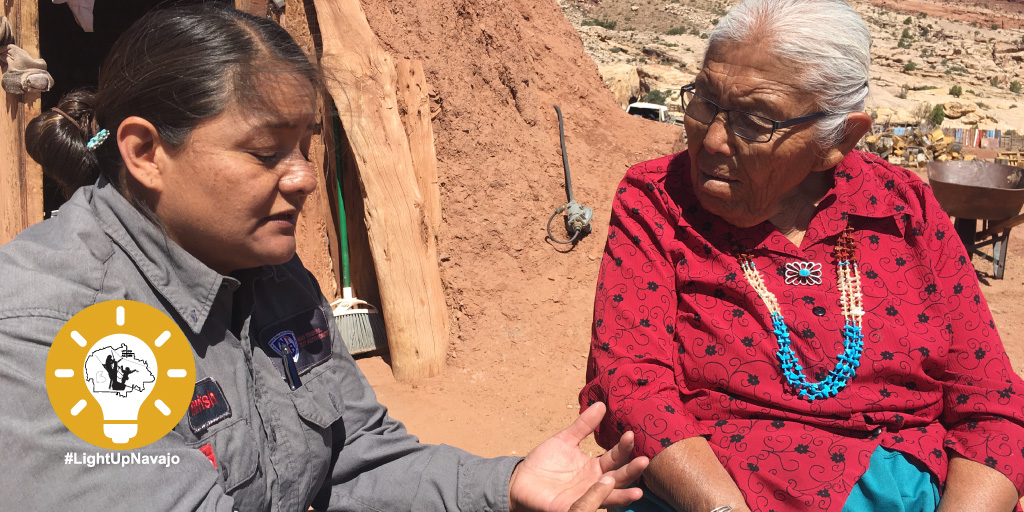