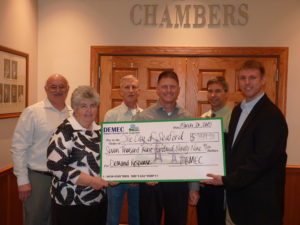 The Delaware Municipal Electric Corporation (DEMEC) congratulates the City of Seaford for its outstanding participation in the 2014/2015 Demand Response Program Year.  The City of Seaford received a cash incentive for reducing their energy consumption during high energy use hours last summer.