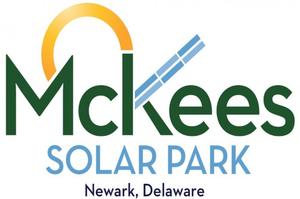 DEMEC, on behalf of the City of Newark, developed McKees Solar Park, a 230-kilowatt solar farm. The project revitalized a 3.91-acre brownfield site off East Cleveland Avenue.  The Solar Park will provide Newark with a behind-the-meter renewable power source to serve all residents by reducing the City’s peak power demand, lowering the wholesale cost of power, generating solar renewable energy credits, bringing locally produced green energy to the City’s electric users, and reducing the City’s carbon footprint.  The 900-panel array will produce enough electricity to power approximately 26 to 36 homes, depending on the season.  Commercial operation is anticipated before the end of summer 2014.  Questions about the McKee’s Solar Park can be directed to the City of Newark at (302) 366-7085.

The City of Newark’s McKees Solar Park is also home to the first opt-in community solar program in Delaware. This program, conceived and proposed by DEMEC and approved by Newark City Council on June 23, 2014, will launch programs to promote community involvement in the Solar Park.   There are several program participation options such as:  “Sun Ray” in which subscribers will have the opportunity to make a one-time investment of $50 in return for a monthly rebate of $1.00 and the opportunity to purchase one (1), 100 kilowatt-hour block of power generated from McKees Solar Park each month for ten years.  Participants can also select from a variety of a tax-deductible donation options to support the park and be recognized on the City’s website.  “Solar Panel” donors will be recognized on park displays for their larger contribution, which pays for the cost of an entire solar panel!

Click here to go to the online subscription and donation page. A printable application is available here and can be submitted at City Hall, 220 South Main Street, Newark, DE 19711.  Again, thank you for your support!

*”Sun Ray” Solar Subscriptions are limited to City of Newark Residential electric customers only.  200 reservations or “blocks” of solar power are available on a first-come, first-served basis.  Limit one subscription per electric service address.